100th Anniversary of the First Transmission of Sound Over Land 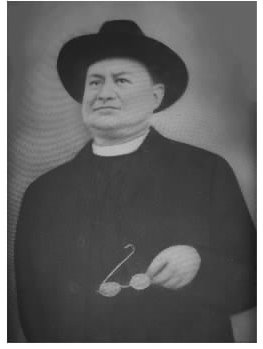 On November 23rd, 1905, the first public demonstration of wireless telegraphy over land was held between Wilkes-Barre and Scranton, Pennsylvania. Mr. Fred Kirkendall, then mayor of Wilkes-Barre, transmitted a message to Mayor Alexander R. Connell of Scranton. A large number of scientists, inventors, statesmen, officials, clergymen and interested persons gathered to witness this historical event in electrical science. The demonstration was a huge success. All messages that were sent were received. Rev. Jozef Murgaš, who conducted this experiment, later became known as the “radio priest”.**

To mark the 100th Anniversary of the occasion, The Slovak Heritage Society of NEPA presented a check for $1,000 to King’s College Communications Department.  The donation was made possible through a bequest from the estate of Theodore M. Salvet specifically designated for the continued remembrance of the life and work of Rev. Jozef Murgaš.

Rev. Jozef Murgaš, a Roman Catholic Priest, was born in Slovakia. Among his many accomplishments, he was an academy-trained artist.  He was able to raise the money necessary to further his electrical experiments by selling many of his paintings. In Father’s tiny, meagerly equipped laboratory, located in the rear of Sacred Heart Slovak Church on North Main Street, Wilkes-Barre, he personally designed and built much of the apparatus used in his experiments.

Father’s work paralleled that of Marconi and other inventors. He systematically followed their experiments and endeavored to improve their systems. In 1900, Father invented the “Rotary Spark Gap (tone) System” of transmission. The tones were more recognizable and were able to be transmitted at 50 WPM-three times faster than Marconi’s system. Marconi’s process could send only a single sound and carry sound only a short distance over water. Murgaš’ invention, however, expanded on Marconi’s. The system was able to transmit two or more sounds over distances of 70 miles over land and 700 miles over water. The variation of sounds developed by Murgaš made communication by Morse code possible.

In November 1904, a group of investors enthusiastic about Murgaš’ experiments, formed the Universal Aether Telegraph Co. $18,000 was invested to construct two site with two 200 foot towers, one in Wilkes-Barre and one in Scranton, 19 miles to the north.

Later, Father Murgaš slightly rearranged his tone system and was able to transmit the human voice. During a demonstration, the words, “Glory Be To God” rang out on the receiving end of the transmission as the Slovak priest’s voice traveled through the atmosphere.

Father Murgaš successfully forwarded the first voice message, revolutionizing the use of wireless communications, and pioneered the development of radio. Time, natural disaster, disappointments in financial backing, ill health, a world war and age, led Murgaš to discontinue his experiments.

Marconi, along with his friend, Professor Fessenden, a noted inventor, argued over who invented the “tone system”. A long chain of lawsuits followed. Finally, the United States District Court, Southern District of New York ruled that Murgaš’ discovery proved him to be the original inventor. He used the financial settlement to purchase a stained glass window for Sacred Heart Church.

In what has been documented as the last visit by Marconi to Father Murgaš in the summer of 1917, Father stated: “I did what I thought was best to do. I’m growing older and not very well. My strength is failing and I do not believe I have very long to live. I do not want this patent to be lost to the human race. Mr. Marconi is a younger man. He is also a scientist and so I gave him the patent with all the information he needs. May God bless him and help him.”

In October 1974 the Sacred Heart parish community donated over $13,000 to King’s College for the Rev. Jozef Murgaš Audio-Visual Aid Center. A replica of the twin towers in Wilkes-Barre was dedicated in1979. The replica was designed by Joseph M. Baloga; it was built and donated by the Metropolitan Wire Works of Wilkes-Barre PA. The dedication took place on the occasion of the 50th Anniversary of the death of Father Murgaš and was spear headed by The Murgaš Amateur Radio Club.

** The above photograph was taken of Father Murgaš as he stood watching the construction of his "broadcasting" Towers in Wilkes-Barre, Pa.

A greater awareness of Father Joseph Murgaš, his biography and achievements has been accomplished by the Slovak Heritage Society of NEPA's video, REVEREND JOSEPH MURGAš, RADIO’S FORGOTTEN GENIUS. This video is available for purchase from the society.