American Slovaks Spearhead Drive for Plaque Dedicated to the 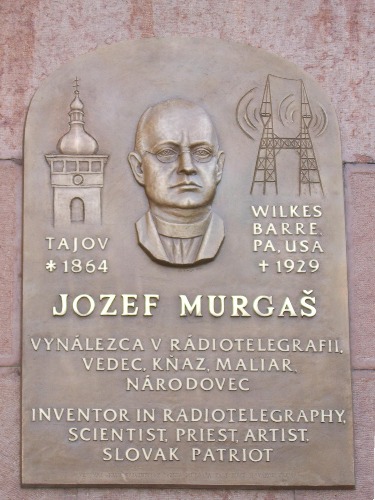 Long recognized as a pioneer in wireless telegraphy, Father Jozef Murgaš spent most of his fruitful life in his adopted homeland of the United States. While most of his creative genius was realized here in the US, his homeland of Slovakia has never forgotten its native son.

From 1896 until his death in 1929, Father Murgaš served as pastor of Sacred Heart Slovak Parish in Wilkes-Barre, PA. One of his successors who served as pastor of the Wilkes-Barre Parish from 1974 to 1985, the Rev. Msgr. Francis J. Beeda, S.T.L., spearheaded a drive for funds to erect a suitable plaque in Slovakia as a tribute to the life and legacy of Father Murgaš.

On September 20, 2006, a beautiful fall day in Slovakia’s capital city of Bratislava with bright sunshine and fluffy clouds above, a special tribute took place at the city’s main post office located in one of the main squares known as Namestie SNP (square of the Slovak national uprising.) A large group of Slovak educators, historians and civic officials gathered along with Americans of Slovak ancestry for the unveiling of the plaque honoring this Slovak patriot. It was the first such honor for this Slovak genius in the Slovak capital.

The J. G. Tajovsky and Joseph Murgaš Club of Bratislava decided that national recognition of Father Murgaš was long over due in Slovakia. The club voted to erect a bronze plaque in recognition of Father's many achievements as an inventor, scientist and artist. The club would see that the plaque would be affixed at a prominent site in the Capital city.

The unveiling of this long awaited tribute had 100 people in attendance. The Master of Ceremonies during the civic program was Dr. Frantisek Svaba, Slovak Minister of Schools. The main speaker at the dedication was Jozef Vranka, author of a book on the life and legacy of Father Murgaš entitled Z Doliny Prerastol Hory (a great mountain has sprung from the valley.) 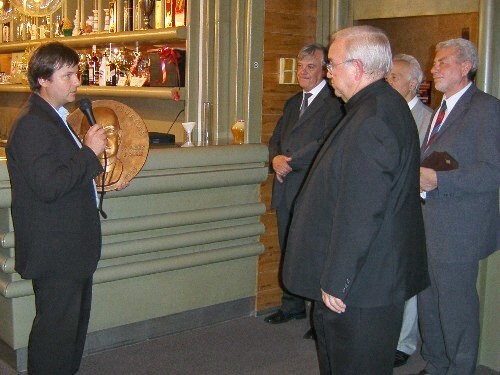 Following the welcome, a poem attributed to Father Murgaš was recited by the talented Eva Kristinova and a musical selection was sung by the renowned Slovak tenor, Martin Babjak of Banska Bystrica. Father Murgas’ native village of Tajov is located just outside this city in central Slovakia. The plaque, designed and executed by a young artist, Jan Simun from Rajecka Lesna, was then unveiled by Blanka Kolibiarova, a grand niece of Father Murgaš, and Msgr. Francis J. Beeda.  (Jan is shown holding a copy of the plaque in the picture with Msgr. Beeda.)

Funding for the plaque was made possible through the generosity of American Slovaks. The Slovak Heritage Society of NEPA was one of the contributors. Without  funding from the US, there would be no plaque. Words could not express the gratitude of the Murgaš Club in Bratislava for the generosity of the American Slovaks. At the dedication, Father Murgaš’ grand niece, Blanka Kolibiarova, expressed thanks and gratitude not only in her name but that of her children and grandchildren who were present at the dedication. Her sentiments were repeated over and over and her eyes were filled with tears of joy on this happy occasion.

The unique design of the plaque includes the likeness off Father Murgaš with the tower of the church in the village of Tajov where he was born and the date of his birth in 1864 on the left side. And on the right side is a replica of the transmission tower in Wilkes-Barre, Pa, US, where he lived and died in 1929. The inscription on the plaque is in Slovak. Its English translation is “Father Joseph Murgaš - Inventor in radio telegraphy, scientist, priest, artist and Slovak patriot.”

Following the official unveiling, Msgr. Beeda offered remarks in Slovak, expressing gratitude to the Murgaš Club of Bratislava for their efforts to procure this honor for Father Murgaš. He also thanked all the donors, and on behalf of the American Slovak community, he expressed the pride that all Americans of Slovak ancestry have in Father Murgaš. The unveiling ceremony concluded with Eva Kristinova leading the assembly in singing the spirited and patriotic hymn of Karol Kuzmany...Kto Za Pravdu Hori  (Who for Truth’s A-Glowing) which so beautifully mirrored the life and legacy of Father Murgaš.

Following the public ceremony a wonderful reception was held at the Klub Spisovateľov (the Slovak Writer’s Club), just within walking distance of the main post office in the pedestrian zone of Bratislava, not far from McDonalds, where light refreshments were served to a “full house.”

Anna and Joseph M. Biros, a well-known activist couple who are members of SHSNEPA, attended the dedication with Msgr. Beeda. They divide their time between the U.S. and Slovakia.