In May 2006, Jean Olexy and Frank Luther presented, at King's College, a series on Slovak Castles. 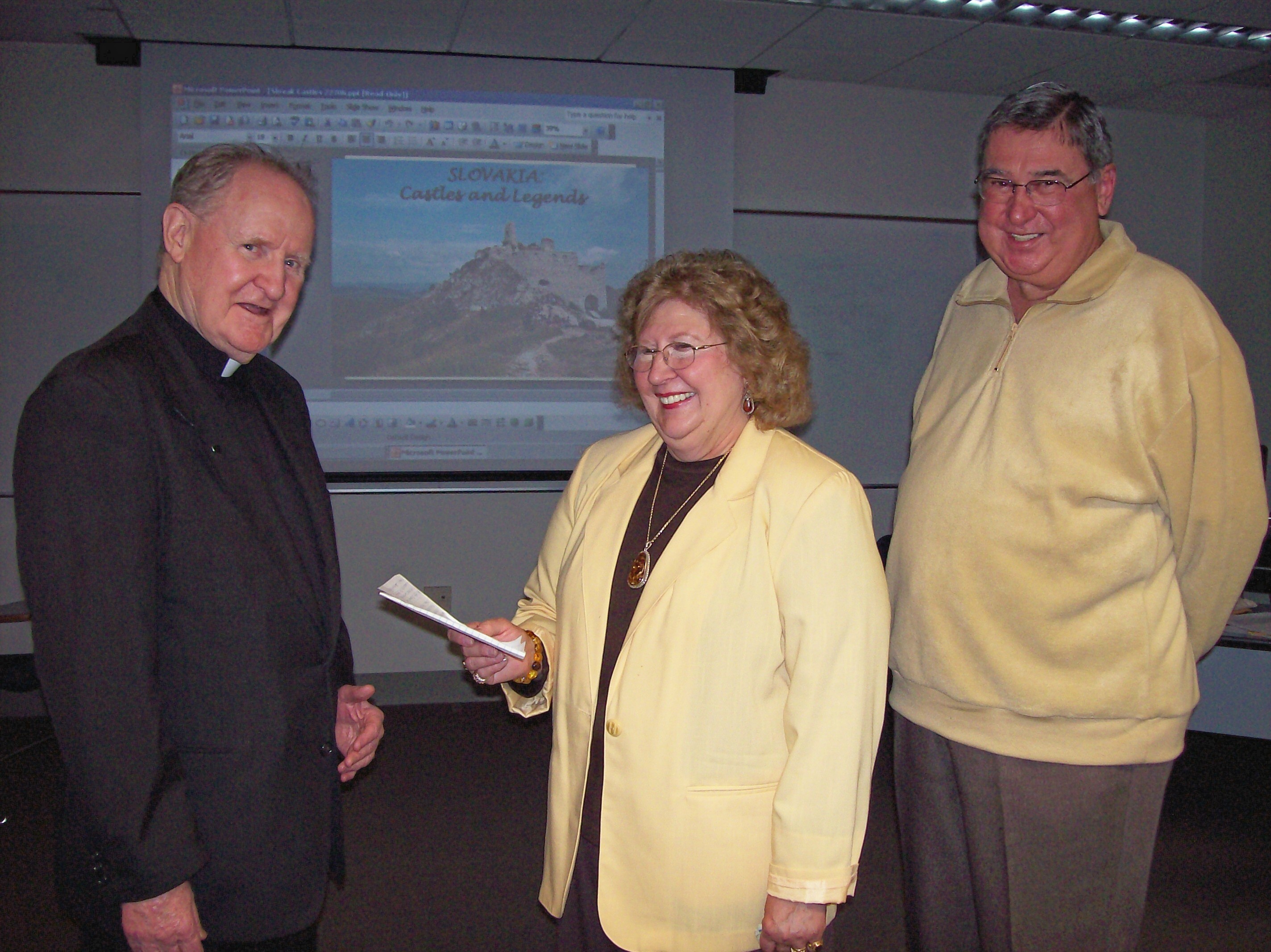 May 3, 2006 The first session of their “Castles of Slovakia” was held in McGowan Hall at King's College. It is a part of the presentations scheduled by King's College Ethnic Community Outreach. The lecture was well attended.

In the picture at right are Rev. Patrick Sullivan, Jean, and Frank. A picture of čachtice Castle is in background. A shocking tale of this castle was told on May 17th.

Most of the castles in Slovakia were built in the 11th and 12th century and some were within 20 miles of each other. They were built to fortify the borders against foreign invaders such as the Turks and the Tartars, guard the trade routes and collect tolls. They were for protection and financial gain. Areas of Slovakia were in the center of the amber and salt trade routes. The armies of Rome, Hungary, Poland, Turkey, Austria, Germany and Russia invaded the country for thousands of years.

(Jankola Library in Danville, Pa has a copy of a stone from the Trenčin castle which has a Roman inscription, that testifies to their presence in Trenčin in 179 A.D.)

Spain has the most castles, followed by Italy. Slovakia is 3rd in line. Various invaders or fires ruined most of the castles. Napoleon destroyed the Devin castle in 1809.

Slides of the Devin, Bratislava, Trinčin and Bojnica castles were shown and many interesting details of their history were presented.

Jean told some folk tales that were amusing and scary. They let me print one for you. You will find it on our Folk Tales and Legends page titled Bratislava Castle - Legend of the Giant.

The May 17th presentation was excellent. The castles covered were Orava, Trenčin, Nitra and, of course, the 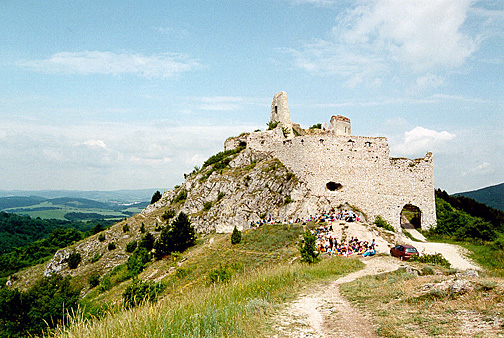 infamous čachtice Castle. Frank and Jean gave a history of each and some of the folk tales associated with them. In covering these castles, we are traveling across Slovakia from west to east.  Did you know there are so many songs written about the different towns in Slovakia that you could take a musical trip though the country?

The true tale of the čachtice Castle (shown at right) is eerie. Countess Alžbeta Báthory who lived in the castle was born in Hungary and was known as a vampire goddess. She was a bloodthirsty murderess who was so vain that she used the blood of young women to maintain her beauty. Her husband was known for torturing people and she learned much from him. It is rumored that she was the great-niece of Count Dracula. Many books are written about her and a program was shown recently on PBS in the Philadelphia area about her life.

May 24th What a wonderful series of presentations. Jean and Frank spent a great deal of time and effort in preparing these lectures. They gathered much of their info from reading books, talking with former students, teachers and people from Slovakia.  Father Sullivan, Frank, Jean and the Society were very pleased with the attendance and attention shown at all of the lectures.

This final session covered the following castles in Eastern Slovakia; Beckov, špiš (which is the largest castle in Central Europe), Muráň, Kapušany and šariš. The movie Dragonheart was filmed at šariš.  In 1945 this castle became part of the state. Every May 1st at šariš, many events common in the medieval times take place, such as reenactments of sword fights and the falconers displaying their birds.

Again the stories were very entertaining. For example the lady in white is a common story of a woman who is dressed in white and rides a white horse. She usually symbolizes the coming of death. The White Lady of Levoča is based, as most of the legends are, on a true story of a Hungarian woman.

The Society is very grateful to Frank and Jean. They live in the Southeastern part of Pennsylvania, have a two-hour drive, and have stayed in Wilkes-Barre overnight for these presentations.