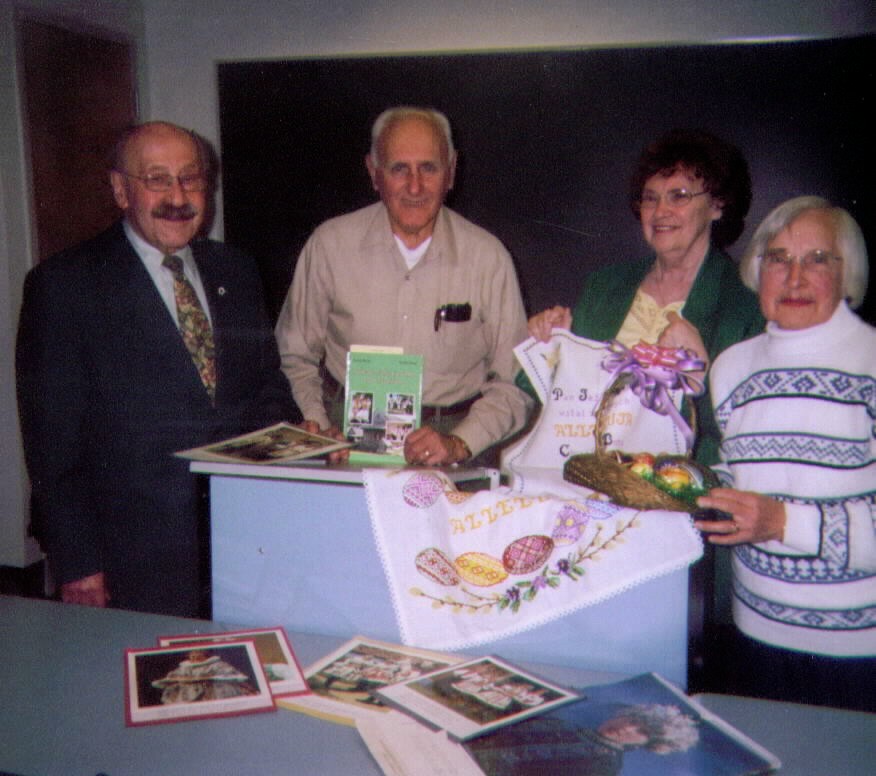 Helen Savinski spoke of the many religious and folk customs of Easter; starting with Fašiangy, the covering of statues on Passion Sunday, silencing of the bells on Holy Thursday, the Savior’s Grave that was displayed on Good Friday and the Glorious Resurrection Service held Holy Saturday. She told of the traditional foods in the Easter Baskets that were blessed and their significances. The folk customs were interesting.  Everything was cleaned, cleaned cleaned. The people, the houses, and even the horses. It was customary to bathe in running water, so the brooks and streams were very busy. The dunking and switching custom of Easter Monday was also explained. She showed some Písanky and displayed two Easter clothes.

Bernadette Yencha spoke on funerals and the signs that people believed foretold a coming death in the family. Often people believed that the person dying was waiting for a member of the family to return before the passed on. It was customary to have a lighted candle and a cross in the room of the dying person. The viewing lasted three days and usually was in the home. The body was never left alone. She also explained rituals that the family and friends of the deceased would perform during the viewing and funerals. Remember never speak ill of the dead. And if you dream about a dead person pray for them.

Andrew Sofranko spoke about Spinning Meetings and their importance in the social life of a village. In the village there was a lot to do during the day, but nightlife was very limited. There were no theatres, shopping malls, cell phones, DVD players or Ipods; so the nightlife was limited. The unmarried young ladies would get together and spin yarn into woolen or linen cloths to be used for their clothing. The young men would be invited to some of these meetings; these were perfect opportunities for social interaction.

Philip Tuhy spoke on elaborate wedding ceremonies that involved various rituals and individuals. Such as, the starosta or mayor, the best man, and the father of the bride. The entire village attended the ceremony and the feasting after, which could last three days. Marriages were often arranged due to the fact, the health of the village society depended upon good relations and prosperous families. Therefore, the opinions of the parents and entire family outweighed the individual feelings of the young woman and man. Pictures of the wedding parties in their traditional kroj were displayed.

These topics and many others may be found in our newly published book Slovak Folk Customs and Traditions.