An article written by Richard C. Lewis for the Associated Press was recently featured in the June 18, 2006 issue of the Wilkes-Barre Sunday Citizens Voice newspaper.  Mr. Lewis returned to Slovakia after several years and told of the many wonderful sites in the country. He says, “For most Americans, Slovakia and its capital city, Bratislava, are still seen as secondary stops in the express train between Prague and Budapest or other better-known eastern European destinations.”

He goes on to say, that Bratislava is charming, vibrant and will especially appeal to tourists, who enjoy mixing with the locals. He describes the “Old Town district with its cobblestone squares, narrow, labyrinthine streets and a castle offering sweeping views of the city and the Danube River.” Hlavne Namestie, the city’s main square is Bratislava’s renaissance. Hviezdoslavovo Namestie is a long, mall-like boulevard that is a stroller’s dream passing the Slovak National Theater building and a small square. People are rushing to and fro; others are walking leisurely pass fountains, a gazebo and many restaurants featuring bryndzove halusky and slivovica. A walk to St. Martin’s Cathedral reminds one that the cathedral was used by the Hungarians for crowning many of their royalty, including the Empress Maria Theresa.

(Did you know that the Castle in Bratislava was her summer home?  She had a large stone staircase built in the castle so that she could ride her horse up to the top floor. Oh to be rich and in charge.)

Mr. Lewis also talks about the Spiš castle in Eastern Slovakia, which is a UNESCO World Heritage site. 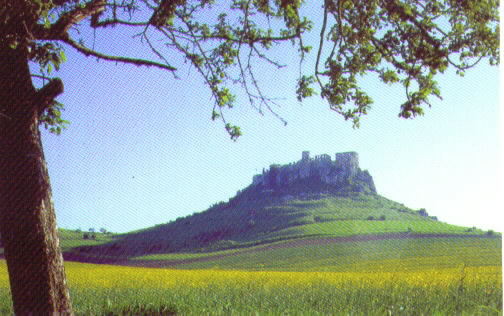 It is one of the largest castles in Central Europe and is open to visitors. The panoramic view of the countryside with the Tatra Mountains in the distance is worth the steep climb to the castle ruins. In the nearby village of Spišský štvrotok, the lords of the castle of the Zápoľský family built a gothic chapel in 1473, which is one of the finest gothic churches in Slovakia. He mentions Levoča, where the renowned woodcarver Majster Pavol carved intricate structures and the main altar in St. James Church.

I recommend reading his article. It makes me long to visit Slovakia. I hope it encourages you to take a trip to the country of our forefathers.