What Would Cyril and  Methodius Do?

(This is an article that was published in the Slovak Catholic Federation 2006 Dobrý Pastier. It is based on a speech given by Sister M. Thomas More Dzurnak, SS.C.M at the celebration of the centennial of the Slovak Catholic Sokol, by Group 12 in Reading, Pennsylvania.)

Remembering the immigrants of one hundred years ago makes me think of the story of Michael Kupčik. When he reached Ellis Island some time in the 1890s after the journey from Slovakia, unfortunately some dyslexic official sent him to Connellsville, Pennsylvania, rather than to his relatives in Collinsville, Connecticut. In Connellsville, he made a reputation for himself with his fists, until the Irish pastor got through to him: “Mike, you’re wasting your brain. I’ll teach you English.” Mike learned English, moved to Connecticut, married and had a family. He was one of my four Slovak immigrant grandparents.

Pope John Paul II wrote that one of the greatest events in the history of evangelization was certainly the mission of the two brothers from Thessalonica, Saint Cyril and Saint Methodius, to the Slavs. They introduced the Gospel and at the same time laid the foundations of Slavic culture. The late pope noted that both were active on behalf of the unity of the Eastern and Western Church even though this unity had already begun to crumble.

When I began my own reflection process on this topic, I noticed five interrelated themes in the lives of Saints Cyril and Methodius, which connect to three Sokol ideals. In the area of religion, it is personal conversion, and following from that, faithfulness to one’s vocation; in the area of health, valuing education and loving wisdom; in the area of ethnic pride, being so happy with our own heritage that we can support people of other cultures, even to the point of self-sacrifice, because we understand what it is to be proud of our identity. Then Hurricane Katrina struck, and all of these themes and ideals took on an additional layer of meaning.

Both Methodius and Cyril left successful careers to follow a calling to the monastic life. Later they left the monastery to go to God’s people when they discerned God’s voice in the calls from the emperor, from Rastislav, and from the pope. Through Scripture and liturgy in the people’s own language and a native clergy, they called the people to love of God and love of neighbor. 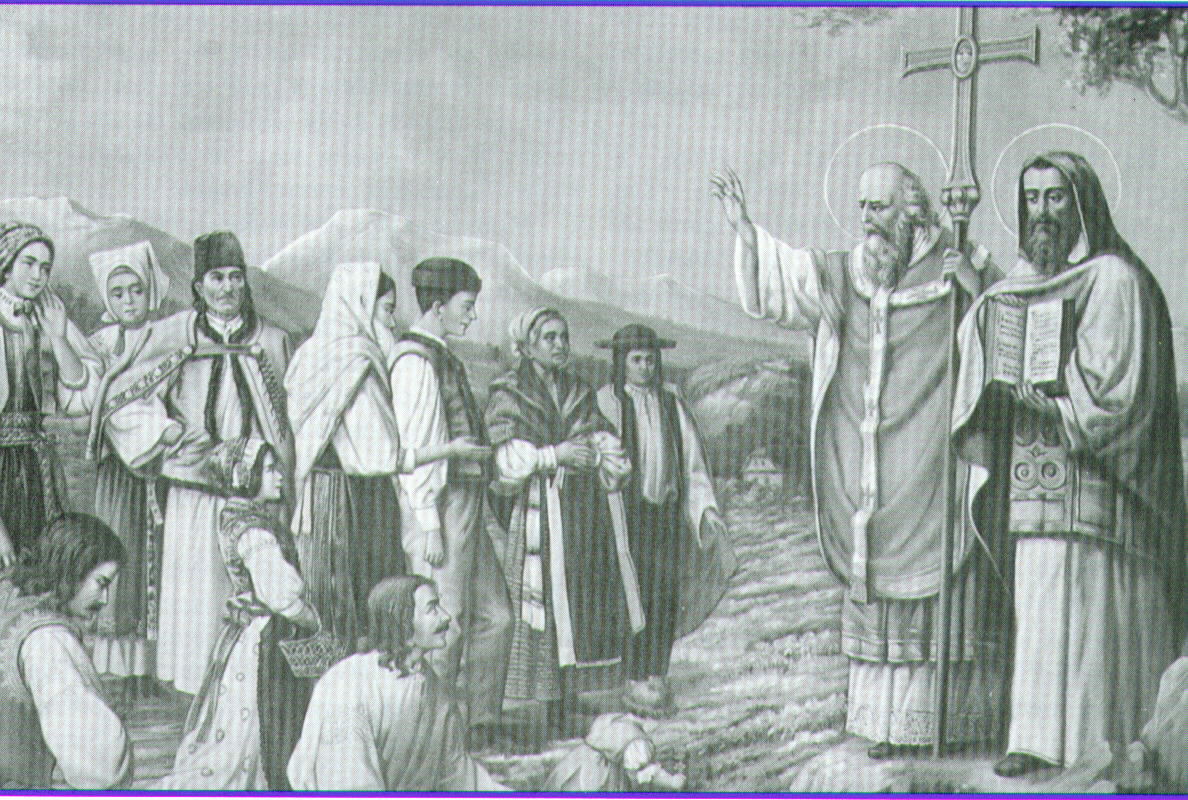 In her study of Saints Cyril and Methodius, Sister Virginia Dewan, SS.C.M wrote, “Even though both followed a path they would not have chosen for themselves, they did it with enthusiasm, and put all they had into the work God gave them to do.”

Cyril’s boyhood dream of selecting Sophia as his bride strongly symbolizes his love of wisdom. Students themselves, both men put their knowledge to work at the service of those in need. In the training of priests, they passed on their knowledge, in the creation of an alphabet; they opened the way for a body of literature to develop.

Why do I connect this value with the Sokol promotion of health? I do so because true education and wisdom relate to mental and spiritual health, because complete education includes physical training, and because the Scriptural ideal of wisdom covers every aspect of life: mental, spiritual, physical, and emotional. In short, the aim is if for a sound mind in a sound body. Even before Hurricane Katrina, both the National Governors’ Association and the Catholic Health Association had already decided to focus for the coming year on wellness, prevention, and the need to live healthier, more active lives. Both organizations can use all possible support and cooperation to make their programs successful. Now the people in the areas devastated by the hurricane have great needs for all kinds of help in caring for the sick and the aged, preventing illness, and providing for mental health.

As for supporting people of other cultures to the point of sacrificing one’s own personal preferences, this is our greatest challenge because it calls us to be the most counter-cultural. Much of the secular media steadily tries to persuade us that today’s immigrants are a great danger to this nation of immigrants.

In an examination of conscience based on the lives of Cyril and Methodius, Sister Virginia Dewan wrote: “Saints Cyril and Methodius were willing to immerse themselves into a different culture and become one with the people. They didn’t try to force a foreign way of life on them, but adapted the life enhancing elements of their background to the way of life the Slavs were used to. ”Cyril and Methodius were motivated by a great love and respect for each other’s uniqueness. They went along with the wishes of others: their parents, civil authorities, the Holy Father, God, graciously and uncomplainingly, in a spirit of prayer and humble obedience. Their attitude remained unshaken, even when they were being persecuted.

Cyril and Methodius serve as great examples and model for us how to welcome one another. They spent their entire lives serving those who had a different way of life. They created a written language and a literature in which all could grow in faith together. They met the people where they were, living with and among them, learning from them as they taught. They respected the cultural differences they encountered, embraced the richness, and strove to journey with the people to a closer and more personal relationship with God, a love that spilled over into their relations with others.

Whether we are assisting disaster refugees or seeking justice for today’s immigrants, Cyril and Methodius give us a wonderful pattern to follow.

Personal conversion and following our vocations require courage. Through education we can foster this wisdom in others. Let us have respect for ourselves. The Sokol physical fitness programs provide opportunities for developing respect for self and for others. The greater respect we have for ourselves, the more respectful we can be toward others, even if they are very different from us.

Now, in the aftermath of Hurricane Katrina, those who have these great health needs are people who have their own ethnic pride, just as we do. Many opportunities to help them are being set out before us everywhere we turn. The collection, which was taken up at this Sokol gathering, is a way to assist directly through this organization.

There is another proposal, concerning today’s immigrants, for us to reflect on. It is a need which became known just before the Hurricane Katrina disaster claimed our attention. I believe it is in line with Sokol ideals of religion, health, and ethnic pride, an action which involves personal conversion, education and the wisdom of embracing all God’s people. It has to do with immigration policy reform, an issue of particular concern to the United States and the Mexican bishops. The principles, which these bishops put together for a just immigration reform proposal, include: a legalization program for the undocumented,

a temporary worker program with appropriate protections, reform of the family preference system to reduce waiting time for families to be reunited, and restoration of due process protections for immigrants.

There is now a bill in the U.S. Senate and another in the House, which creates a path to citizenship for undocumented workers who are here now; a temporary worker program for future workers; and changes in the family preference system to reduce the backlogs in family reunification.

The U.S. Catholic Bishops’ Migration and Refugee Services asks us to show support for the Secure America and Orderly Immigration Act of 2005 by contacting our Senators and Representatives as soon as possible, asking them to cosponsor and support the legislation. More information is available on www.educationforjustice.org,  a website easy enough to remember.

While I was considering this last issue, I consulted one of our sisters who is of Hispanic heritage, Sister Rosa Maria. She told me: “Part of why I love Cyril and Methodius so much is the fact that they have exemplified for me what it means to be respectful of all people and because they model how different cultures can be respectfully integrated.”

Now I ask you to ask yourself: “What do I, a twenty-first century Catholic of Slovak heritage, love most about Saints Cyril and Methodius?” When you identify that quality of theirs which touches your heart most deeply, look at how it relates to the signs of the times. Then you will be able to choose the particular way that you will live out our heritage of faith and culture, after the ninth-century example of Saints Cyril and Methodius.