Anna Hudock received the 2019 Fraternalist of the Year from FCSLA. This award is an honor presented to recognize an individual within their organization who, through example and accomplishment, provide outstanding volunteer service to his or her FCSLA branch, church and community during the past year. Anna is a member of Senior Branch 172 and treasury of the Magdalen I. Iskra district.

While visiting at the University of Scranton, Bishop Viliam Judak, Bishop of Nitra Slovakia, and Msgr. Martin Stofka toured The Murgaš Room at King’s College. Their trip was arranged by the President of St. Elizabeth University in Bratislava, Slovakia, one of the two Universities

that exchange students with the University of Scranton. They were greeted by the Board of the Directors of the Slovak Heritage Society of NEPA. Michael Stretanski explained all the artifacts in the room and Magdalen Benish presented gifts from the society and the Murgaš video to them.

The Bishop and Msgr. later visited the Sacred Heart Cemetery in Dallas where Father Murgaš is buried.

Parish Volunteer of the Year 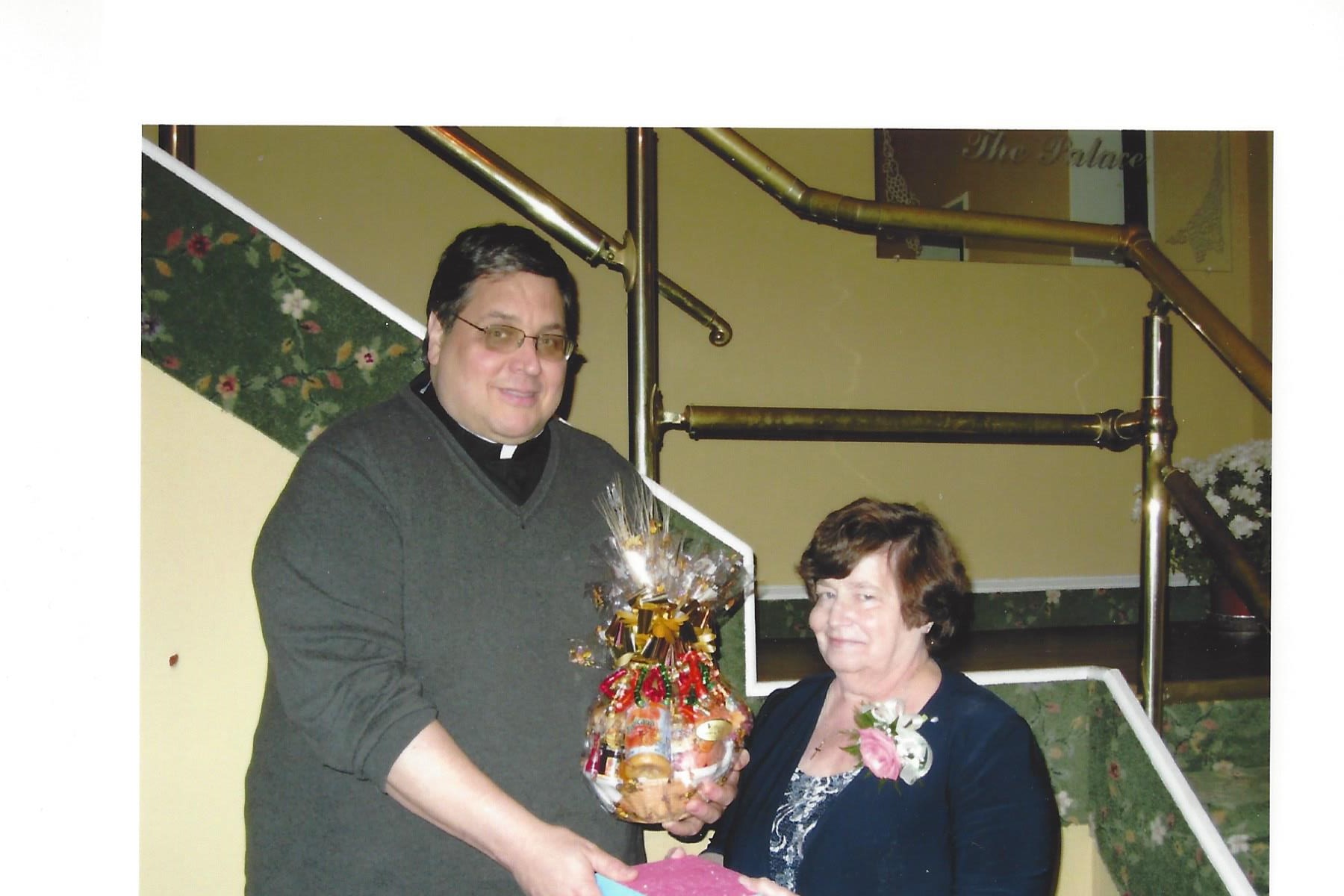 Ms. Anna M. Hudock, Recording Secretary of SHSNEPA was chosen Parish Volunteer of the Year at St. André Bessette Parish.  She is the chairperson of the Parish Social Justice Council, sings in the choir, serves as a Lector and Extraordinary Minister of Communion, visits the hospitalized and the homebound, is an active member of the parish also serving on several committees, and she can relate the history anything in the North End of Wilkes-Barre

Anna is the Treasurer of the Magdalen I Iskra District of the FCSLA and a number of other fraternals and social committees throughout the Wilkes-Barre area but still finds time to be involved with her family, especially her beloved nieces and nephews.

Magdalen Benish received the 2017 SSCM Fr. Matthew Jankola Lifetime Servant Leadership Award for Ecumenism. Maggie exemplifies what can be achieved in a life guided by spiritual principles, driven by determination and persistence, and open to new and innovative ideas. She has taken to heart our SSCM spirit and mission of outreach to all God's people through our efforts in Evangelization, Education, Eldercare, and Ecumenism.

All recipients received a Certificate of Gratitude, an SSCM engraved towel, and a water pitcher as a reminder of the gesture and mandate of Jesus to the Apostles at the Last Supper: "Do as you have seen Me do. Love one another."

Magdalen Benish and Michael Stretanski (Slovak Heritage Society of NEPA official chef), two of our board members, were recently invited to a special dinner held at King’s College in Wilkes-Barre. Pa

A small gathering of 20 individuals enjoyed an authentic “Polish Dinner” prepared by Chef Jacek Wierzbicki from Poland.  The meal consisted of a variety of pirohy, salmon, holupki, roasted pumpkin and strawberry puffs. It was an excellent meal.

After the dinner, they met with Chef Jacek and exchanged cooking ideas. It was a pleasure to speak with him.

Our thanks to King’s College for a superb meal and the opportunity to meet Chef Wierzbicki.

Father Christopher T. Washington, a former altar boy of St. Joseph's Slovak Church, Wilkes-Barre, Pa, was appointed in July 2015 by Pope Francis to serve as secretary of the Apostolic Nunciature in Bolivia. Father Washington is originally from the Wilkes-Barre/Scranton area; and was ordained a priest for the Diocese in 2006. Father Washington served the Diocese as Director of Vocations, Director of the Office for Divine Worship, Master of Ceremonies for the Bishop, and chaplain of Holy Cross High School, Dunmore. Our prayers and thoughts are with you Father Chris. 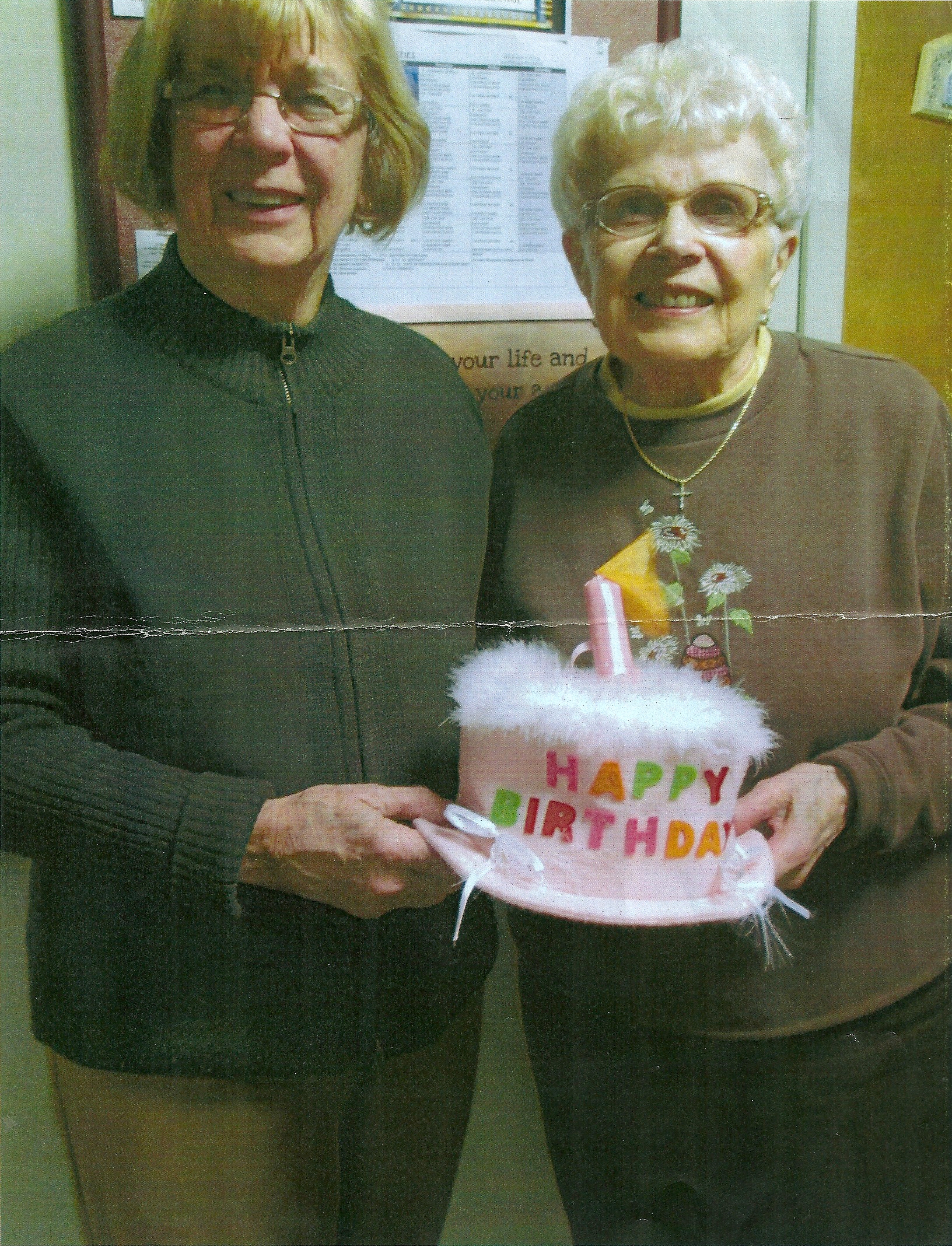 Mrs. Betty Pirnick recently celebrated her 91st birthday, January 2015, at St. Luke's Villa, where she resides. The party was given in her honor by the staff of St. Luke's. A number of Betty's friends and fellow residents attended.

Betty grew up in the North End section of Wilkes-Barre; she was an active member of the Sacred Heart Slovak Church. Betty was a board member of the Slovak Heritage Society of NEPA for many years. She still is a SHSNEPA member and is also the "Outreach Correspondent" for the new Jozef Murgaš Room at King's on the Square at King's College, Wilkes-Barre, Pa.

Pictured is Betty (on right) and Magdalen Benish, SHSNEPA board member.

Magdalen Benish, SHSNepa Financial Advisor, was the recipient of an Appreciation Award presented by the Salvation Army in the Greater Wilkes-Barre, Pa area. Ms. Benish received the celebrated award from Herbert Goefrey, Jr., Advisory Board Member of the Salvation Army at the Annual Recognition Luncheon held in Wilkes-Barre.

Still Smiling After All These Years 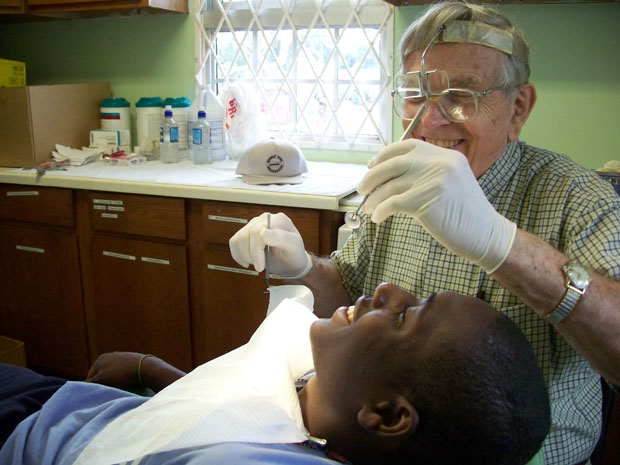 "When Dr. Thomas M. Check took time from his dental practice to travel to Jamaica in 1965 to provide dental care to children with needs at a home conducted by the Religious Sisters of Mercy, he could not know that in March 2014 he would be making his 50th such trip. That is because the need is still there."

A superb article on Dr. Check written by Lou Baldwin and published for the Philadelphia Dioceses on February 4, 2014 can be found at: 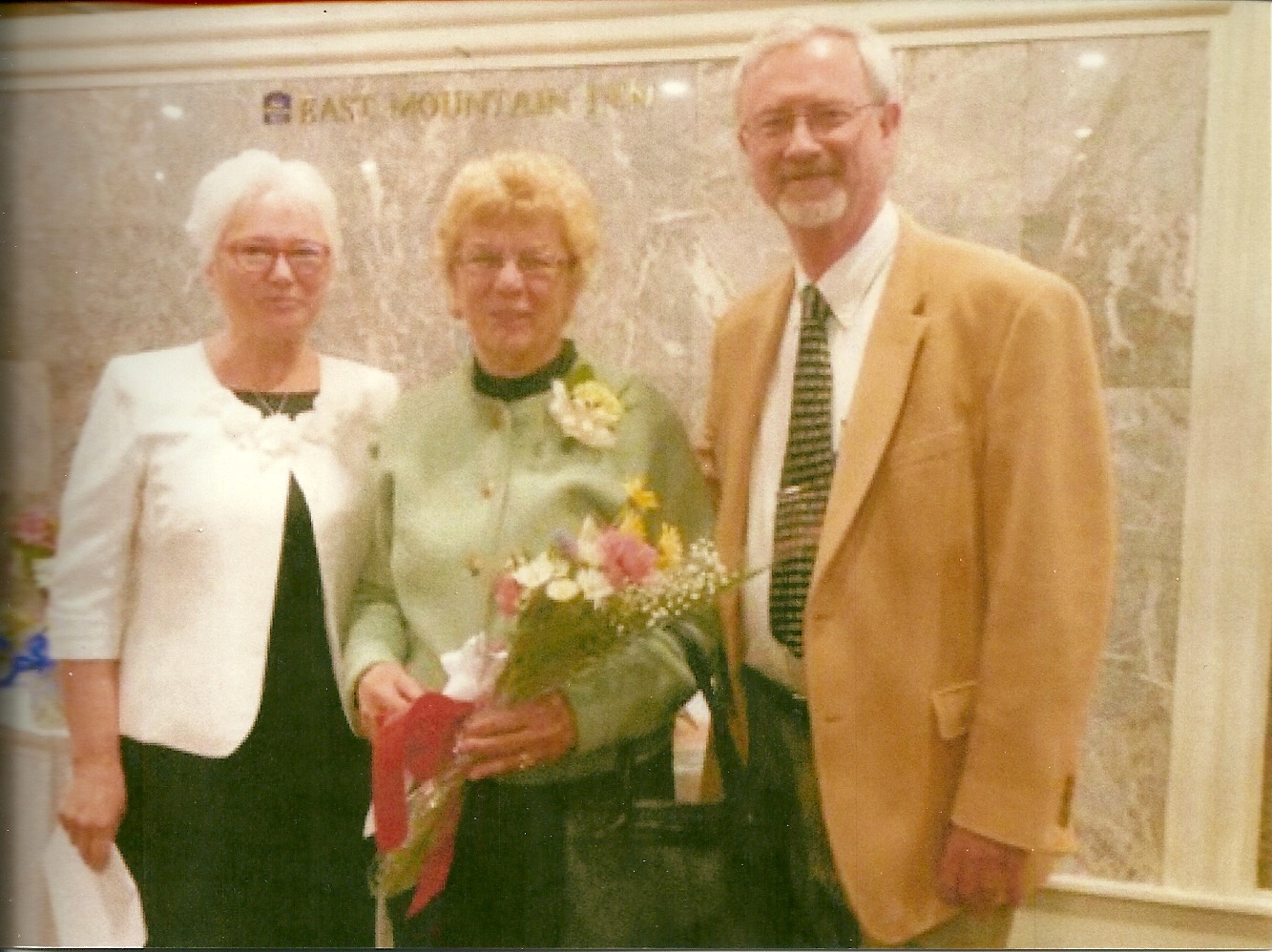 During "National Volunteer Week", Geisinger Medical Center held a Special Luncheon to honor its dedicated volunteers reaching milestones of service achievement. Over 200 individuals were in attendance for the event held at the East Mountain Inn in Wilkes-Barre.

Our own Magdalen Benish, Plains, Pa, was honored for 15 years of service at Geisinger South in Wilkes-Barre. Where she serves in the Pastoral Care Unit in the Hospice and Rehabilitation Centers. Ms. Benish is one of our founding Board members. Congratulations Maggie!

Ms. Benish is shown with Barbara Coyle, Director of Volunteers, and Chaplain Jim Clyde, presenters at the Special Luncheon.

A call was placed to Jerry Gibel, the Society’s New Orleans connection, to interview Tancuj, the new addition to Metarie, Louisiana. However, she was not taking any phone calls so Jerry gave the interview.

She then flew from Kosice to Prague and then to Frankfurt. She overnighted in Frankfurt and then took a direct flight to Houston, Texas. Jerry's neighbors had some business to attend to in Houston, and took him along to pick up Tancuj.  They returned to Metarie in an oversized pick up, even though she was expecting a limo.

She completed Obedience School with honors, although she still has a tendency to obey commands with slight Slovak modifications. She understands both English and Slovak. She does not care for sloppy weather, and doesn't like to get her paws all muddy.

If any one would like help with tracing their Slovak genealogy or with Slovak translations, contact Susan Prostinakova at Tinseltown242003@yahoo.com