The concert was in memory of Trude Check Tuhy, our co-founder. 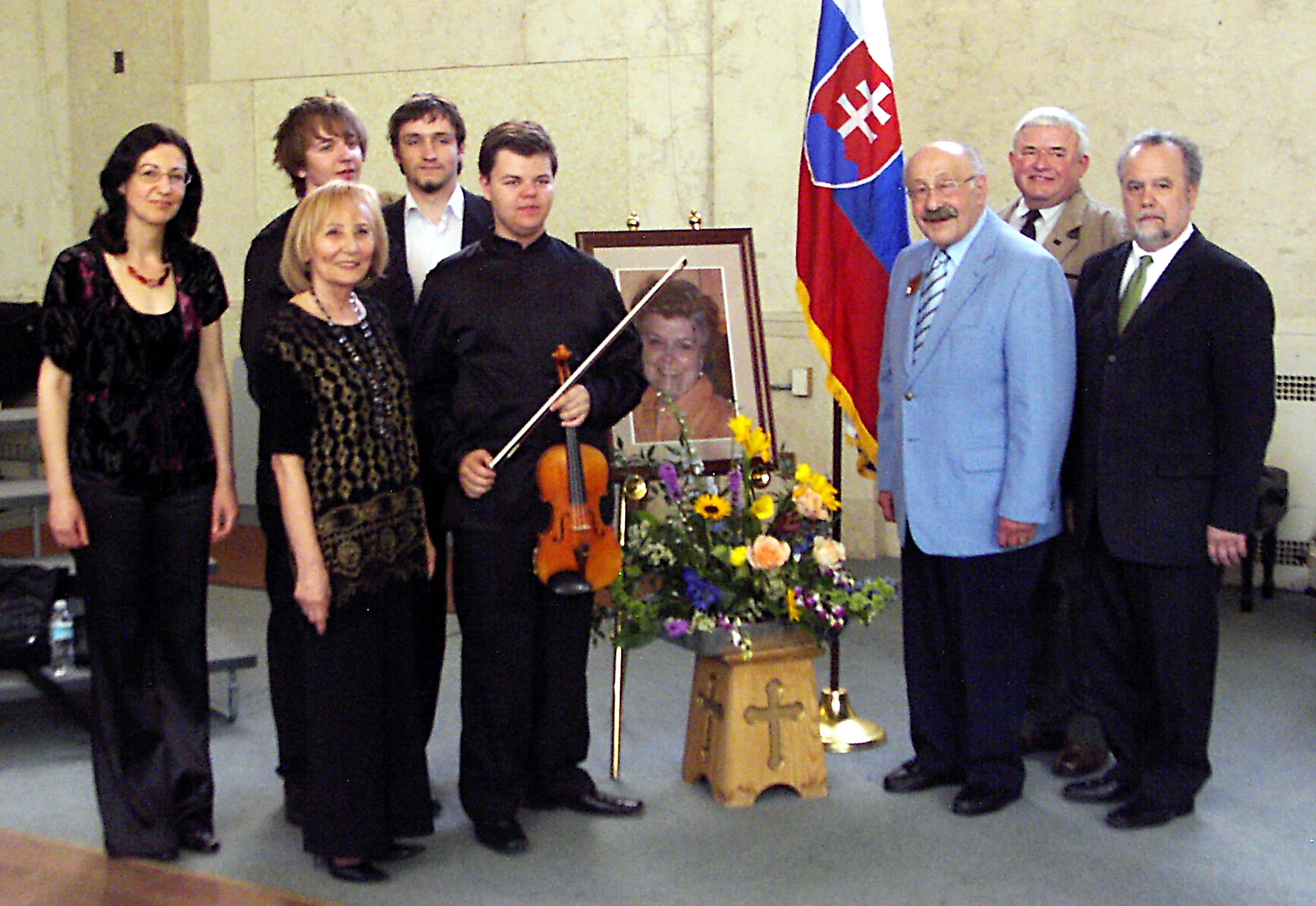 All who attended the Memorial Concert for Trude Check Tuhy were spellbound by the breadth and quality of the young performers from Slovakia. The concert was held in the Great Hall at Wyoming Seminary on Sunday afternoon April 26th. A portrait of Trude, beautiful flowers and the Slovak flag adorned the right side of the stage. The audience was silent and absolutely attentive so as not to miss one note of music in this high caliber performance. This was also true of those who heard them during Saturday Mass at St. Ignatius Church, Kingston and the Sunday morning services at First Presbyterian Church, Wilkes-Barre. The young men played before and during the services.

These young musicians are from the Bratislava State Conservatory of Music, Slovak Republic and were sponsored in part by the Slovak Embassy and the World Artists Experience (WAE) which are based in Washington, DC. The Heritage Society of NEPA and Wyoming Seminary were groups hosting them on their tour. They also performed in Washington DC, Annapolis, Allentown, and New York City.

The group was transported to Wilkes-Barre by Betty McGinnis of the WAE on Friday, April 24th. Daniela Sliačka and Iveta Sabová, the teacher and accompanist, were hosted at the home of Michael Stretanski. Karol Daniš, his brother Norbert Daniš, and Pavol Kubán were housed at Wyoming Seminary and were happy to spend some time with other young people.

The Heritage Society is grateful to John Viada and Nancy Sanderson of Wyoming Seminary for their generous support. The Great Hall was the perfect venue for this memorable occasion.

We are sure everyone who spent any time with group found them wonderfully charming and yet humble. The concert weekend was a wonderful success with special thanks to Michael Stretanski, Philip Tuhy and Bernadette Yencha and the other board members who assisted.

Karol Daniš, age 16, is a major personality of the youngest generation of Slovak performing artists. Since age 3, he has played the violin under his father and began his studies at Bratislava State Conservatory at age six. Young Daniš has won competitive competitions at a very early age and performed with major symphonies. Since 2000, young Daniš has won major violin competitions. In 2006, he won the top prize in an European talent competition and in 2007, he won first prize at the Jarosla Kocian International Violin Competition in Czech Republic and the first prize in the most prestigious Louis Spohr competition for Young Violinists in Germany. Young Daniš has performed with some of the most prestigious groups, as the Janacel Philharmonic, and places as the Liszt Academy and the President's Residence in Malta, and Palaces throughout Europe.

His brother, Norbert Daniš, studied piano from the age of four. He is a graduate of the Bratislava State Conservatory as an extraordinary student. He has received numerous international awards, as prize winners in the Johann Nepomuk Hummel International Competition, the National Competition of Conservatory students. He performs often with his brother.

Pavol Kubáň, baritone, graduated from the Bratislava State Conservatory in opera, and continues to study and perform.  He is the winner of numerous competitions, i.e. Slovak Student Competition, Marin Fran International Opera Festival in Italy, and The International Vocal Competition of Mikulaš Schneider-Trnavsky.