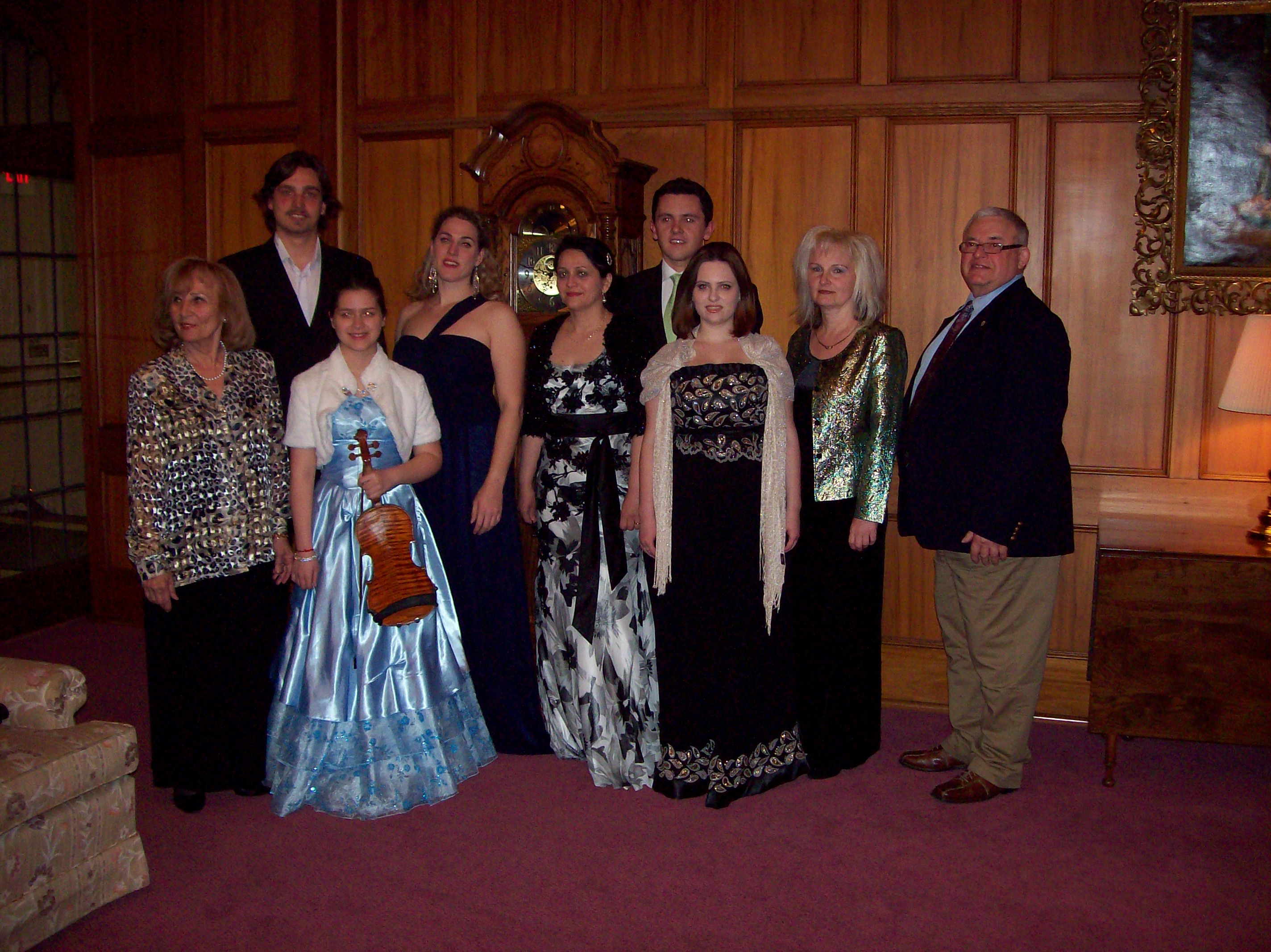 These same terms were used to describe the 2 young gentlemen from Slovakia who performed here in 2009. The terms also apply for the five musicians who performed for us on March 15 at Wyoming Seminary Great Hall and on March 16 at the First Presbyterian Church, Wilkes-Barre.

These young musicians are from the Bratislava Conservatory of Music, Slovak Republic and were sponsored by the World Artists Experience (WAE) which is based in Washington, DC. The Slovak Heritage Society of NEPA was one of the groups hosting them on their tour. Prior to coming to our area, they gave concerts at the Slovak Embassy in Washington, D.C., Annapolis, Salisbury, Baltimore, and Cumberland, MD.  We worked with our friends from Slovak Heritage Association of the Laurel Highlands who sponsored the concerts in Johnstown and Pittsburgh.

The group of eight consisted of four young opera singers and their accompanist, a twelve year old violinist, her accompanist mother and Daniela Sliačka, one of the directors of the Bratislava State Conservatory of Music.  We were responsible for hosting (meals, lodging, transportation) them for four days. Daniela Sliačka and Dana Hajossy (accompanist) stayed with Mike Stretanski.  Jana Ferikova (soprano), Alena Vacíková (soprano), Patrik Horňák (tenor and clarinetist), and Igor Lošár (baritone) stayed at Genetti's hosted by Phil Tuhy.  A very special Thank You to Dr. Diane Polichak Metz and family for taking such great care of Anabela and Aniko Patkolo (violinist and accompanist).  Dr. Polichak was exceptionally gracious and generous. Our guests enjoyed a traditional American Thanksgiving Dinner at Stretanski's on Wednesday. On Thursday they had lunch at Timbers Buffet at Mohecan Sun.

"An Evening at the Opera" concert was presented at Wyoming Seminary's Great Hall followed with a pizza party at the Grotto. Friday was shopping, shopping, shopping with lunch at Old Country Buffet. That evening our grand concert, "An Evening of Sacred and Slovak Folk Music", was presented at the First Presbyterian Church, Wilkes-Barre. This was followed by a wonderful reception hosted by the Society. Like the Slavic Dinner, many people helped to make it a success. Over two hundred people stayed for fabulous food and fellowship. On Saturday morning, all those involved had breakfast at Genetti’s exchanged gifts and bid farewell.

The sheer joy of the concerts awed us. The young violinist played a Gypsy selection on Thursday night was fantastic. Her ability was shown with that number. The two pianists did a duet that was breath taking. All of the singers are so talented, it was a pleasure listening to them. Everyone who met these young people was delighted. The concerts were outstanding, with the Folk sections being the most appreciated by our audience.  The musicians, dressed in folk outfits, wanted to know which Slovak folk songs would be familiar to people in our area. They graciously added them to the program.

The musicians all expressed great pleasure in being with us, because they felt the warmth of our welcome and a feeling of being with family.

Special thanks to Michael Stretanski who spent much time and effort coordinating the entire project and thanks to all the board members who assisted.